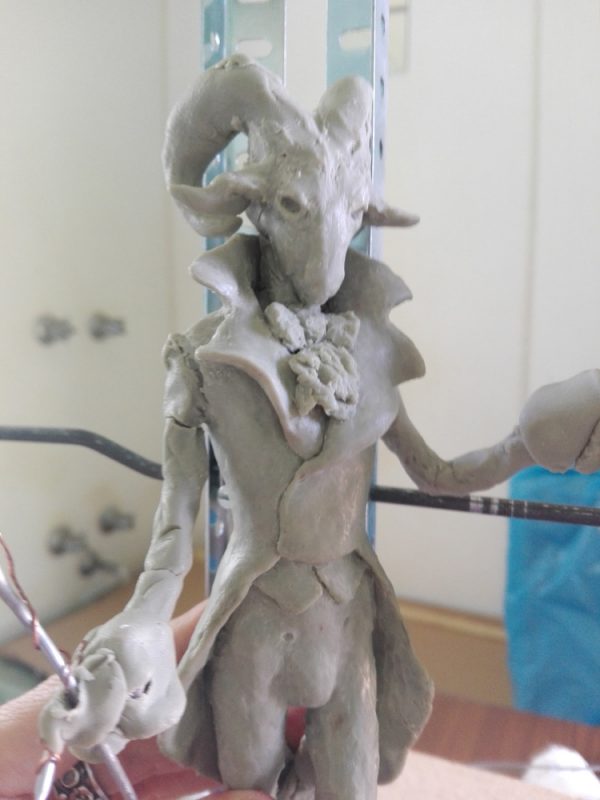 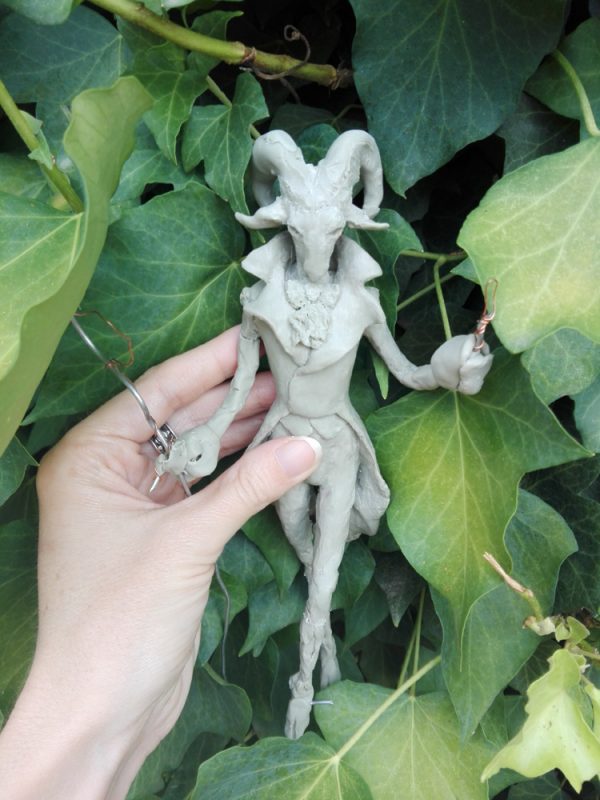 Delicate Donkey lifts a hoof. I wasn’t quite happy with his pose, but when I put him back on his support rod his foot was lifted a little, and now I think it looks right.

He was going to be holding a unicorn mask, but after trying it I prefer him without. Why the camera has turned him pink I don’t know, but it suits him. 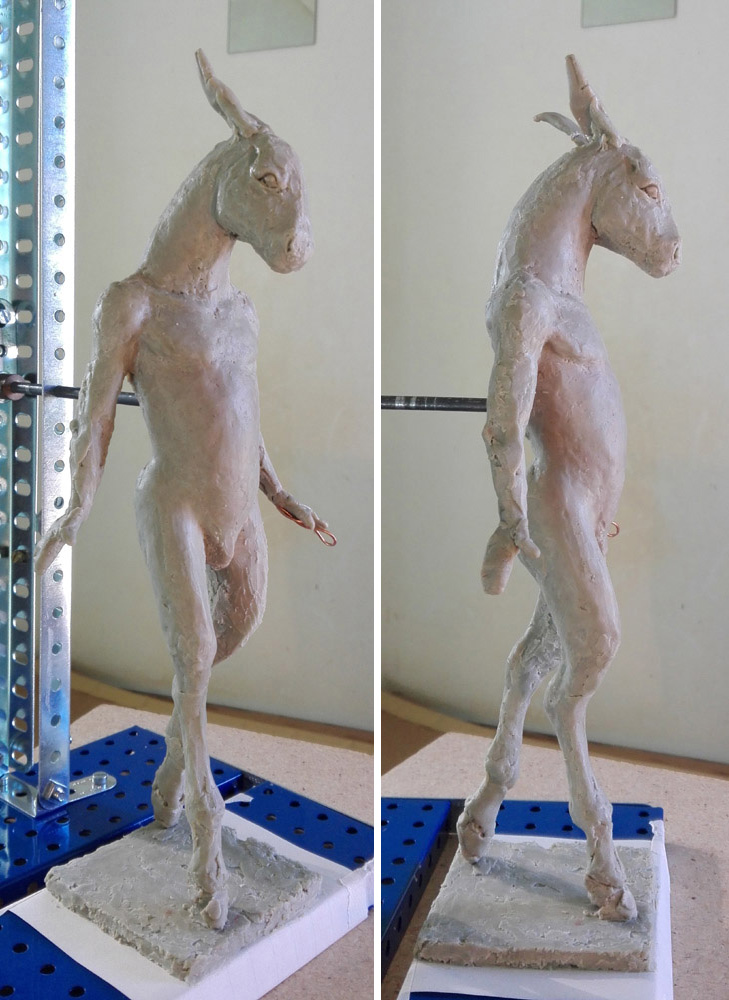 And a still very rough friend, Not a Sausage: 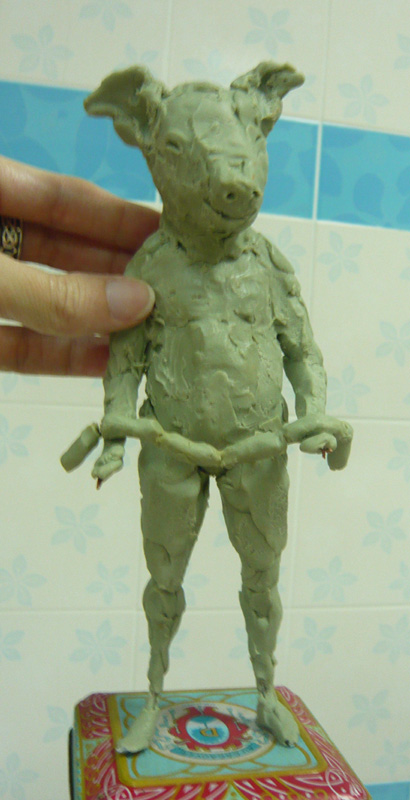 I’ve been doing an open studio for the Castlemaine State Festival, working on three pieces. This one was originally a maquette for a planned larger piece, but as I liked how he was turning out I decided to finish him. When he’s naked he’s a rough shadow in the woods; dressed up, he’s Monsieur le Marquis. Here are some in-progress shots. Looking at these, I realise I’ve lost the original shape of his coat tails, which I want to restore. 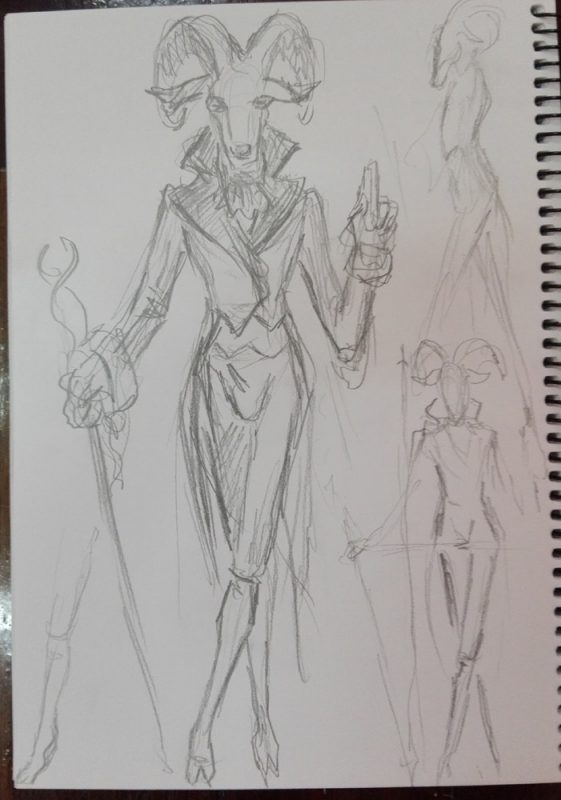 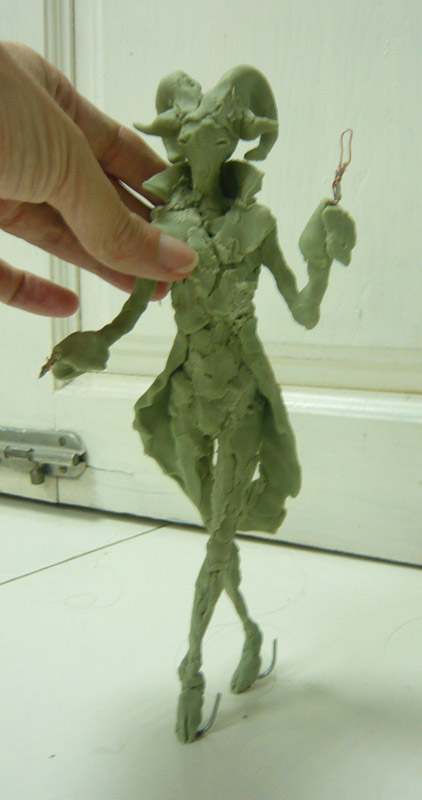 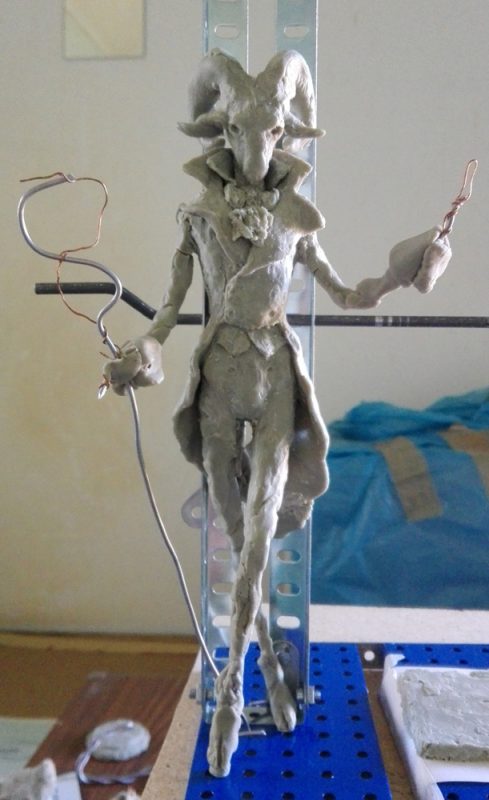 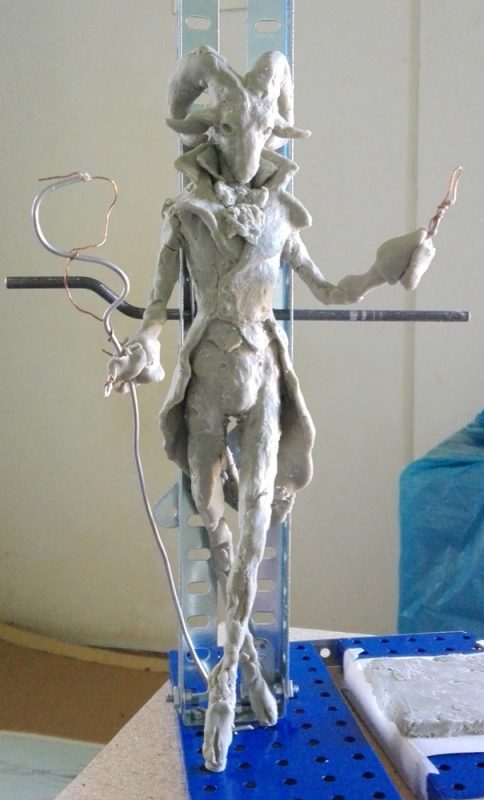 A bit from the start of WIP novella Knights Out:

‘Then how admirably mad,’ Gwynn amended his opinion. His look had grown a mite abstracted.

‘Indeed. Of course, Mattie sees her as a nice little windfall, though she thinks she could choose a better class of gentleman to get disenchanted with. Bless girls and their little ways, eh?’

Gwynn nodded in agreement, reaching for his cigarettes. He wondered, thumbing open the silver case, if he had not just been offered the solution to a problem that was lying on his mind.

Lighting an Auto-da-fé and inhaling at thoughtful length, he let his eyes drift up the steep hill above the street—with all the humid smog, coloured yellow by the lamps of the city, it was more an impression than a view—piles of bumptious marble and stucco blunted like ancient dolmens, traces of domes and balconies and narrow stairs, the farther up the further lost, drowned in an iodine sea—and on the other side, where the low parapet followed the edge of the terrace, with shabby palm trees spaced along it, the valley was filled with a golden gloom in which cupolas and statues on the roofs below were pasted like specimens pressed in tissue. In the road ahead were unknown companions—looking lost, too, as if they had until recently been part of a larger life form which had come to an incomplete end—shuffling along by the parapet, or groping forward with its support—one or two proceeding humbly but nimbly on all fours, like leggy novelties of the sea bed; not to disregard those over whom the promise of day held no power and who remained with the night, lying down under the palms in the truce and refuge of sleep; a humid breeze stirred the fronds above the stubborn bodies; an early rising bird cried out its heart to a vanished shore. Something beautiful was washed up, naked save for a sequinned mask and a saintly smile.

Of course it was the hour for inspiration to show up, gliding by on hypnagogic wings.

Reeling himself in, Gwynn questioned Jasper: ‘Have any of her recent affairs not ended in murder?’

‘Did she happen to say how the room mate rates?’

‘High enough to make her greenish—not that that takes much.’ An note of suspicion entered Jasper’s voice. ‘Planning a tragic love story?’

‘In my mind,’ said Gwynn, waving his cigarette for emphasis, ‘it’s more of a comedy. I don’t suppose Mattie would mind a little help with matchmaking?

‘I don’t suppose she would. Who’s the lucky punter?’

‘No one to worry your pretty head about. Just bring this wondrous Pharice along on a night out and I’ll call it a favour.’

Jasper turned on him with a deep scowl. ‘Aye, I’ll bring her, and kiss your pisspot too. I thought we trusted each other. I must have been thinking of someone else.’

‘Jas, I trust you with all my heart,’ Gwynn protested, laying a hand over the sparkling mineral layer to the fore of that organ, as Jasper continued to look disgusted. ‘I’m only trying to spare you a tedious exposition.’

‘Maybe I like tedious expositions. Who is it, you cagey fuck?’