Russian garlic, artichokes, and some rather aggressive wisteria: 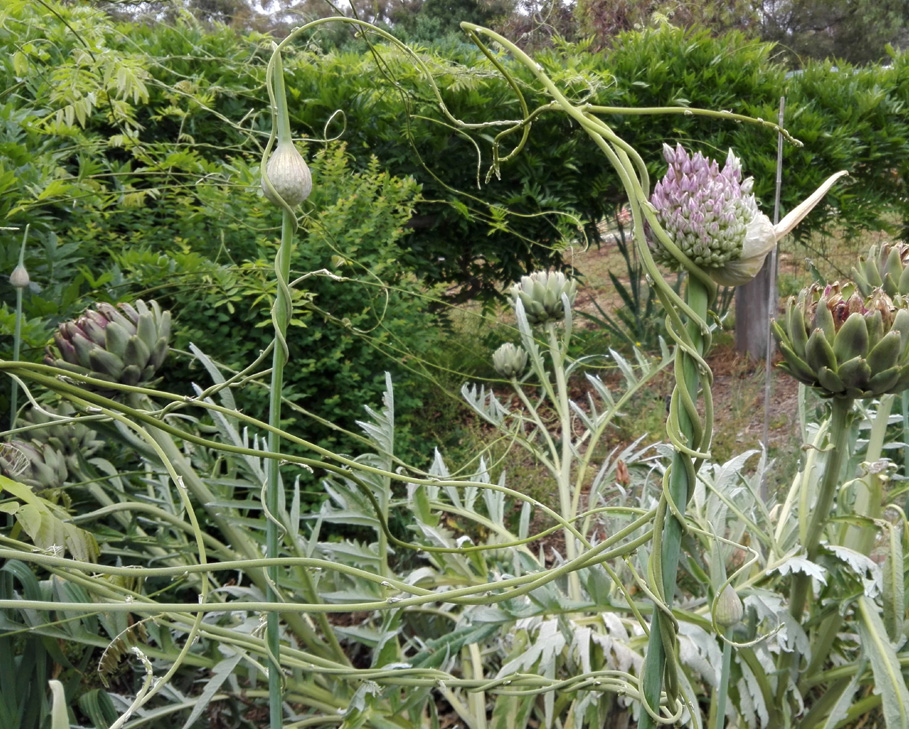 I thought the garden might have attained its final shape, but realised that the frangipani is probably shading the mussaendas too much now that it’s all grown up. The white mussaendas seemed to be happier in the frangipani shade than the pink ones, so I’ve left them there and moved the pink ones off to the walls — and suddenly there’s space again! Hopefully they’ll stop growing straggly to reach light now and get on with flowering.

Also, I’m pretty sure our lizard is a chameleon. It looks just like this one. Haven’t seen it with its colour changed — but I guess that’s the point! 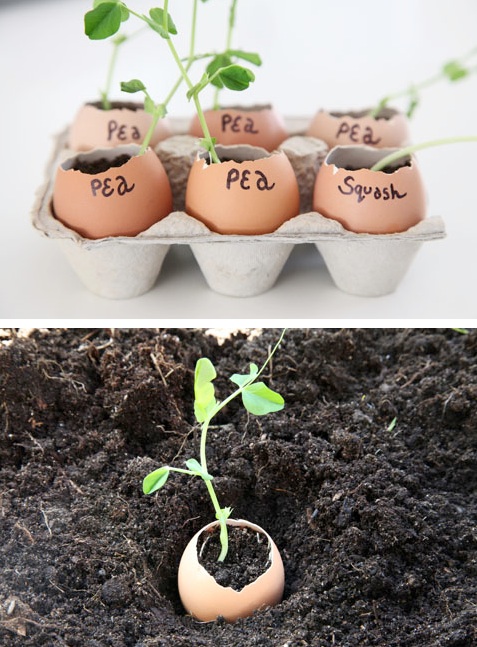 On first read I also liked the idea of growing roses from trimmings poked into potatoes. Then I started thinking about the potatoes. Expecting to live a normal life and be eaten in a normal way, but then a thorny stem is poked into you, and slowly the plant takes you over, spreading its roots through your harmless flesh, consuming you with terrible leisure. Or perhaps it’s just that I like eating potatoes and selfishly don’t want to share them with roses. Perhaps a potato would rather merge with a rose than with me, and stay in the ground and never have to go in an oven.Save 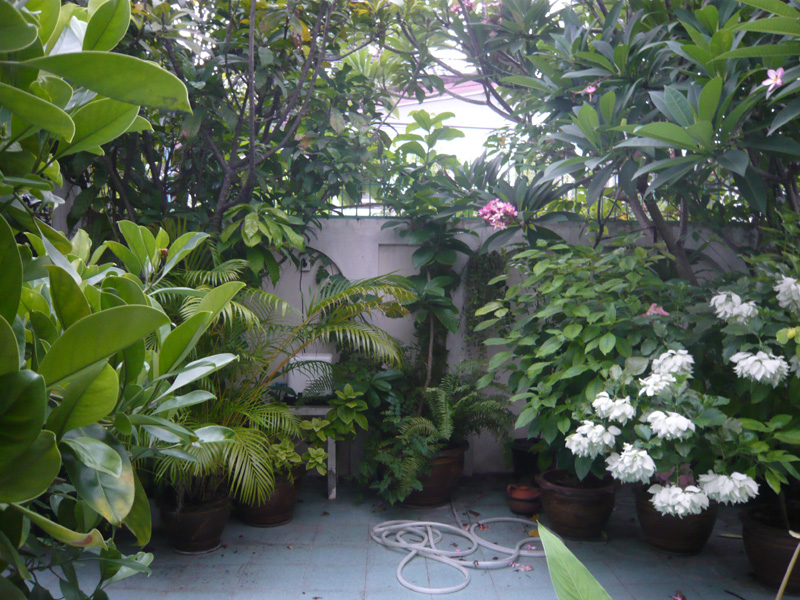 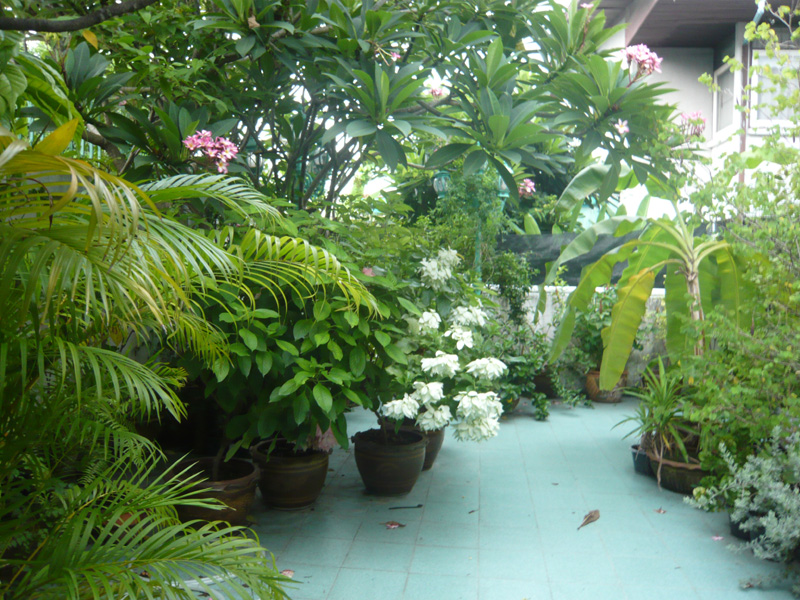 I think things are looking pretty good now. The frangipani has grown to the point where it provides a decent amount of shade. Most plants seem happy where they are. The ferns in the easter lily pot grew there by themselves, and as they don’t seem to be cramping the vine’s style I’ve left them there. After a hard prune the mussaendas grew back nice and bushy. The hydrangeas are both still alive and doing ok, but have never flowered again — either I’m doing something wrong or they don’t like the climate, or being in pots, or something. The palms are golden cane palms, which I think are a great plant — nice elegant leaves, good for filling spaces, and easy to care for.

When I’m wondering how much to prune a plant — if I’m thinking I’d like to cut a lot off but am not sure —  I tend to hear a grandparental voice saying ‘Cut it right back, dear.’ I’ve killed plants through over- and under-watering, I’ve lost them to insects, but I don’t recall that I’ve ever lost one through pruning, and I’ve certainly revitalised a couple by getting medieval on them with the secateurs. (Here, btw, is an explanation of how pruning actually works.)

I recently pruned my mussaendas, which were getting very rangy and giving me a view of little but their spindly trunks as they shot up for the sky. I’ve always been a bit conservative with how much I cut them, but this time I went hard, after receiving assurances that it would do them good, and sure enough they’re now budding all over. To hide the appearance of their stick-like remnants I’ve moved the gardenias behind them — I don’t think the gardenias were getting enough sun anyway, and they make a nice green bushy filler when they’re not in flower.

I thought my trumpet creeper was dead, so cut it down to the ground and tried to pull the roots out — twice — but chickened out rather than risk damaging the roots of the plant it shares the pot with, in case they’re entwined.* Well, it isn’t dead — the stump is sprouting, hooray. (*In most cases I wouldn’t worry so much, but the other plant is the easter lily vine. I’ve killed one of them repotting it and when I repotted this one it dropped most of its leaves and sulked for a year — it’s only flowering again now. In absence of other knowledge I’m assuming it’s sensitive about its roots.)

I also think one of the trees planted in the ground might be dead. The landlady suggested cutting it back to its trunk and seeing if it sprouts. I decided to try something less drastic first and cut off large amounts of its branches (it’s a spindly tree, within my lumberjacking capacities) which all looked dead. I did run into plenty of dead wood, but also some hints of green. So I’ll see what happens, and if no joy, cut lower.

The potted allamandas weren’t a great success growing over the porch — I found them hard to wrangle and they ended up as an untidy bundle of sticks with flowers at the far ends. So I’ve cut them right back, dear, and moved the bougainvillea to porch duty, with one of the strophanthus for a friend. 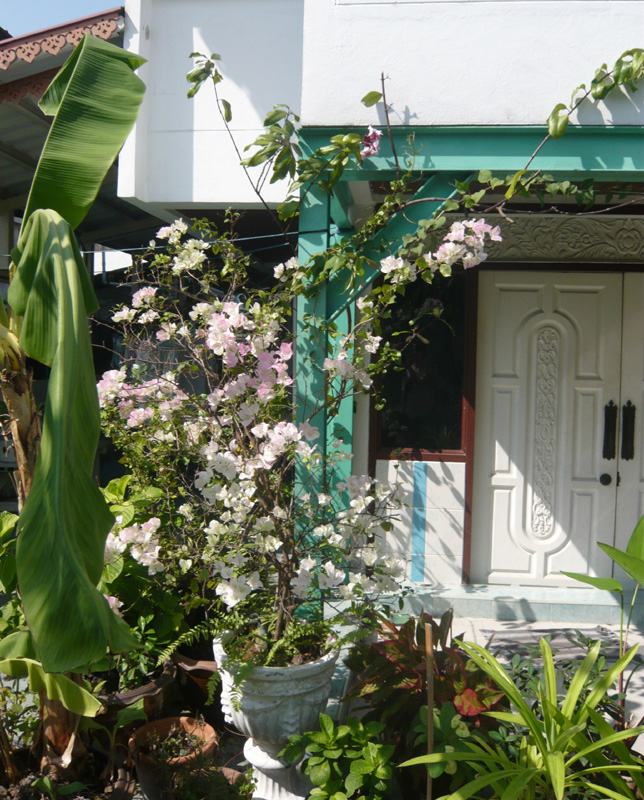 If I ever have another tropical garden, Strophanthus gratus (climbing oleander, rose allamanda) will be one of the first plants I buy.

Its flowers are very pretty and smell like roses, or to be exact, Turkish delight; and the glossy leaves are attractive when the plant isn’t in flower. I’ve never seen a pest on either of mine (the plant is poisonous, which may have something to do with it), and they’re doing well in their pots, with one growing as a vine and the other as a rambling bush. I’ve seen pictures of them pruned into tidy little trees — they seem quite malleable! 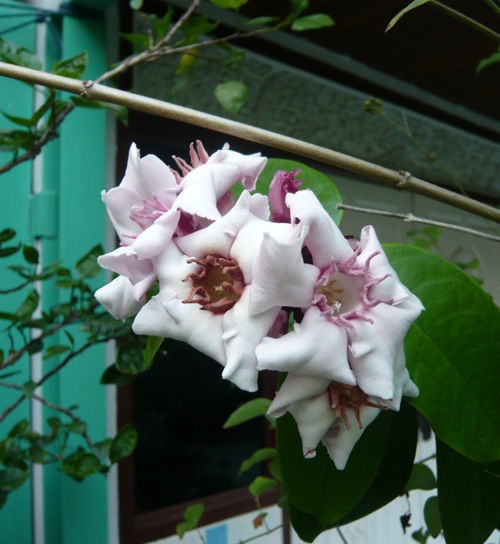 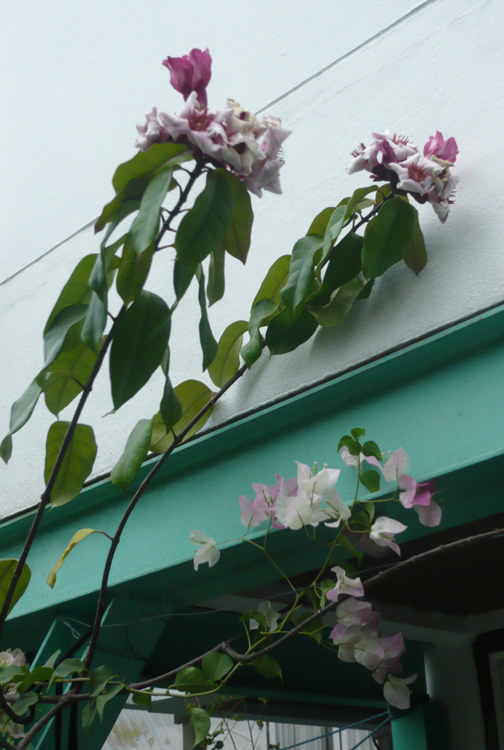 There’s a tree in our garden that I’m sure is a gustavia. It always looks beleaguered — perhaps because gustavia is an understorey tree and our garden has no upper storey — though as the frangipani has grown, blocking some of the sun, I fancy that the gustavia looks less miserable. It occasionally makes lovely pink sweet-smelling flowers — but until now has never produced one low enough to photograph (I only know the scent from fallen ones). This morning it surprised me: 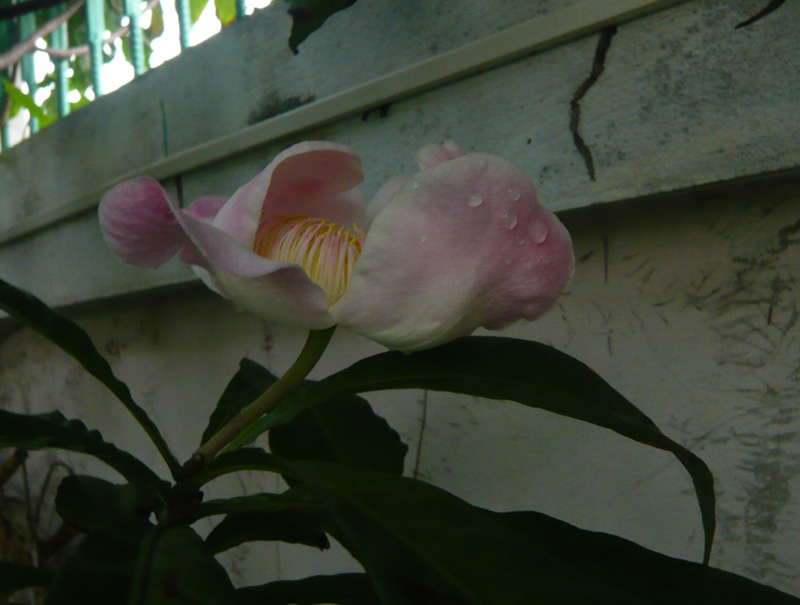 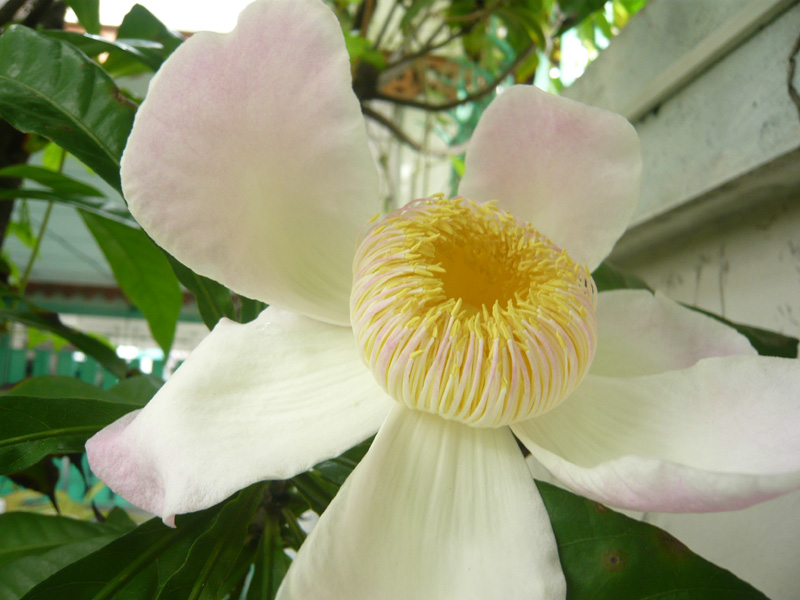 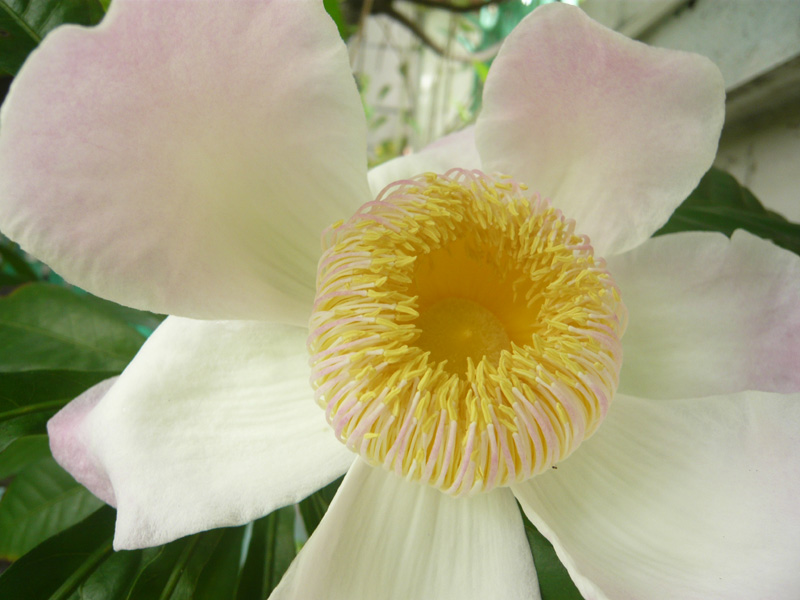 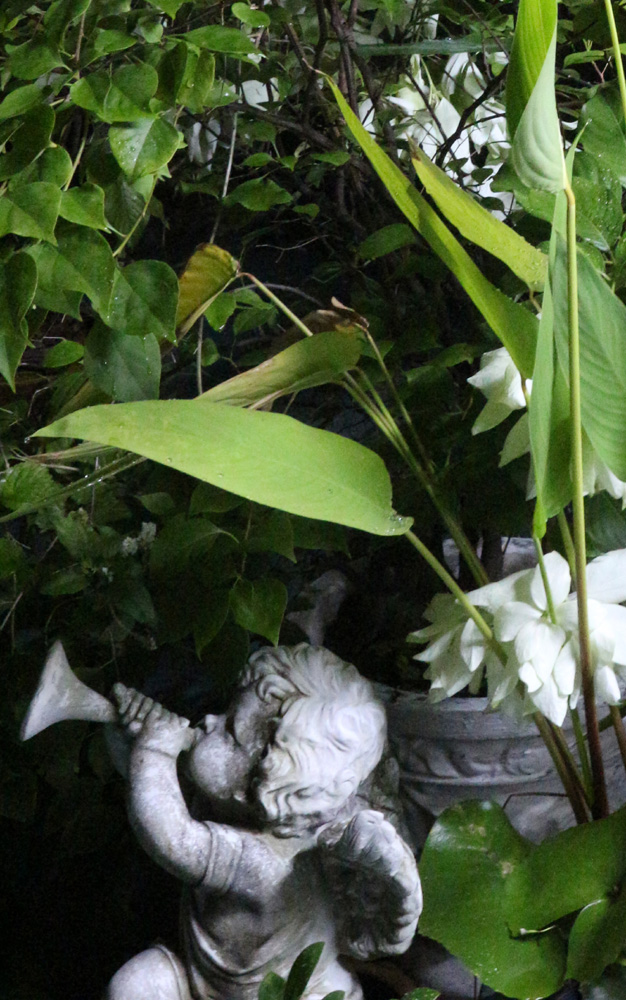 Our banana tree has a flower! (and six bananas) How the garden’s looking these days: