An amusing list of Victorian slang from Passing English of the Victorian era, a dictionary of heterodox English, slang and phrase, 1909, by James Redding Ware (who, incidentally, under the pen name of Andrew Forrester, created one of the first fictional female detectives.)

I especially like Afternoonified: A society word meaning “smart”, e.g. “The goods are not ‘afternoonified’ enough for me.”

and Podsnappery: Wilful determination to ignore the objectionable or inconvenient, at the same time assuming airs of superior virtue and noble resignation.

Dipping into the Passing English dictionary:

Fit in the arm: A blow. In June 1897 one Tom Kelly was given into custody by a woman for striking her. His defence before the magistrate took the shape of the declaration that ‘a fit had seized him in the arm’, and for months afterwards back street frequenters called a blow a fit.

He worships his creator: Said of a self-made man who has a good opinion of himself.

Who took it out of you? Meaning wholly unknown to people not absolutely of lower class.

The internet seems to have nothing on Robin Goodfiller outside of this dictionary. According to Wiktionary, dusius is “a kind of evil spirit”, from  Gaulish *dusios (“incubus, monster”), probably from Proto-Indo-European *dʰeus- (“spirit”). Compare Czech duše (“soul”).

And Whitechapel Warriors: Militia of the Aldgate district; and
White Army, The: A band of men who formed themselves together to combat social evil.
Was Victorian London adorned with roaming bands of vigilantes and do-gooders? The only other reference I can find to Whitechapel warriors is in a dialogue, Bon Gaultier and his Friends, in Tait’s Edinburgh Magazine, 1844. Bon Gaultier was a nom de plume of the writers William Edmondstoune Aytoun and Sir Theodore Martin, and their Whitechapel warriors seems to be an epithet for an invented regiment, the Ninth Poltroons, after whom we hear about “the Black Skulkers, a fine cavalry regiment, which made war principally upon its own account.” I may want to borrow them.
(I drift, but I’ll forget this if I don’t write it down — I read somewhere that the tradition of natty cavalry uniforms got started when mounted soldiers would raid the baggage trains and dress in what they seized. And now I can’t find the article again, chiz.)

As for the White Army (of London), I can’t find any other record of it.

A few more from The Art of Manliness, Manly Slang from the 19th Century:

Bully Trap: A brave man with a mild or effeminate appearance, by whom the bullies are frequently taken in.

Fart Catcher: A valet or footman, from his walking behind his master or mistress.

Gullyfluff: The waste — coagulated dust, crumbs, and hair — which accumulates imperceptibly in the pockets of schoolboys.

Half-mourning: To have a black eye from a blow. As distinguished from ” whole-mourning,” two black eyes.

Out of Print: Slang made use of by booksellers. In speaking of any person that is dead, they observe, “he is out of print.”

Tune the Old Cow Died Of: An epithet for any ill-played or discordant piece of music.

I found this little fellow made of some kind of cast resin, about 20cm tall, with half an Oxfam sticker on the bottom of his foot, in a flea market here in Bangkok. 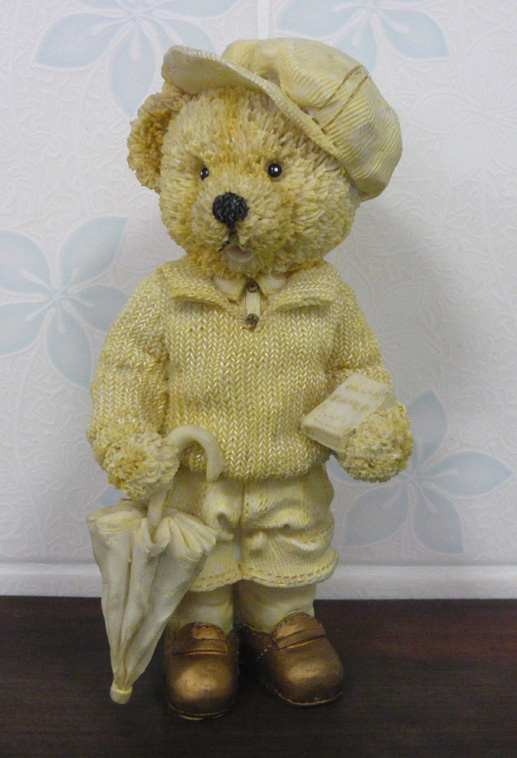 His clothing seems to have been cast from real fabric, including his jumper. The knitted jumper pattern has been used for his nose, too. There are a couple of filed-down casting lines on his jumper and hat. The vendor thought he was handmade. I can’t find a manufacturer’s trademark or a signature, nor can I decipher the writing on the book — I think it’s just scribble, followed by four strokes like a paw print. I’ve looked for him online but no matches turn up.

He really looks like an old-fashioned little English boy on his own version of the Grand Tour. He must have been on quite a journey, but he looks not remotely tired of travelling. As for his name, he seems happy to be called Arthur. 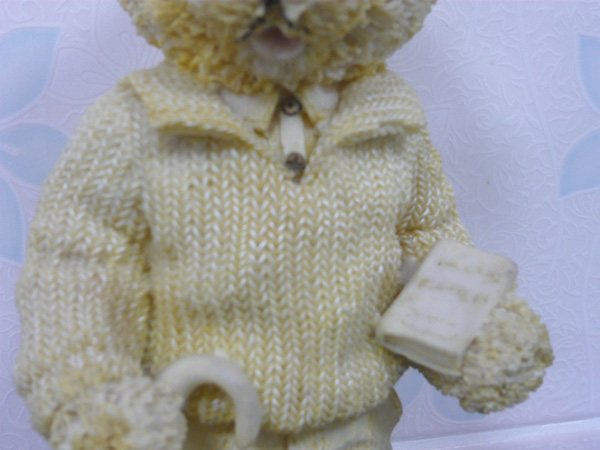 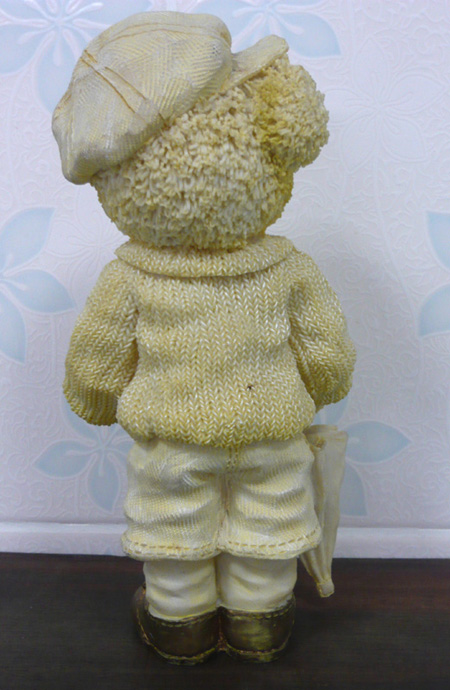 There’s a type of clothing that I only became aware of recently: the Western horse show jacket. I think they’re worn for the Western Pleasure category — not sure if they’re worn for other styles/events. At any rate, as a lover of clothes that go up to 11 I think they’re awesome, and could imagine the gents of Ashamoil’s demimonde sporting looks like these. In order, they’re by Lindsey James, Showtimes, Collezione di Anna (Anna Omodeo), and Sho-N-Off. 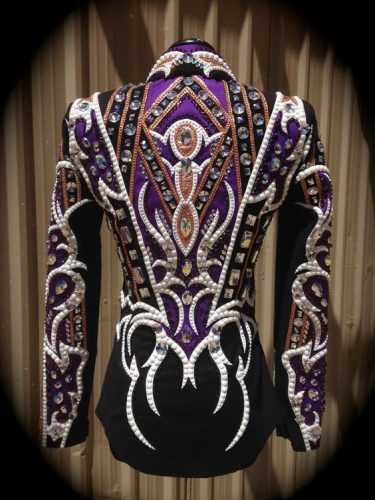 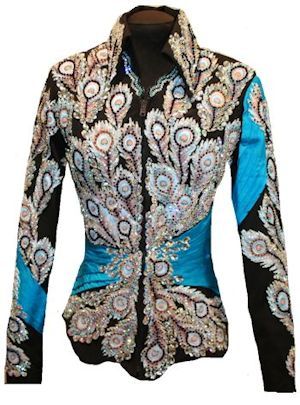 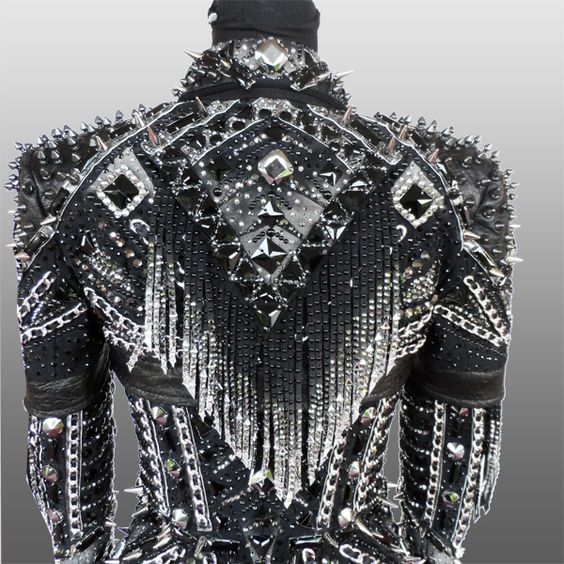 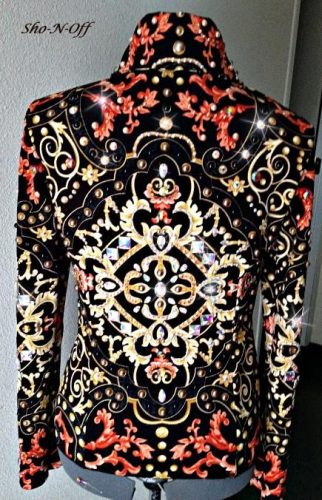 Or for something a little dialled back, perhaps Italian designer Archetipo: 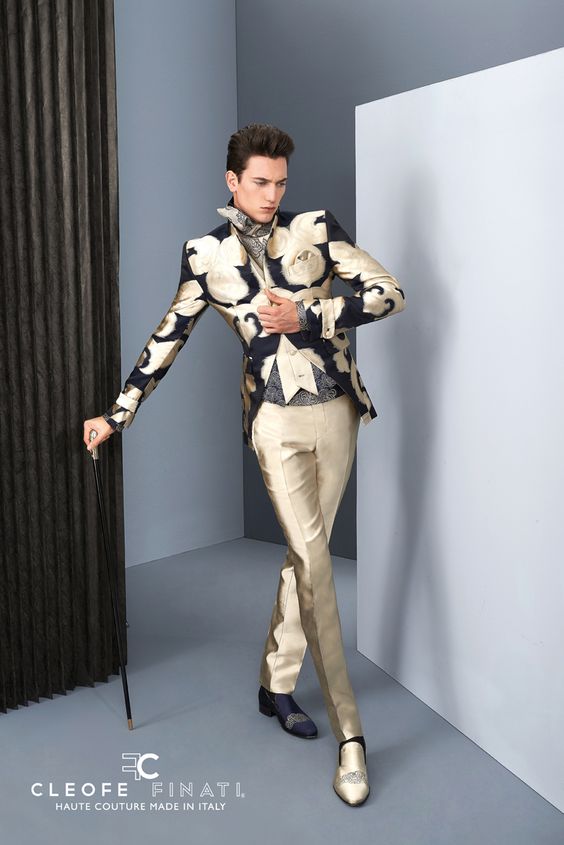 Or these Jean Paul Gaultier outfits — don’t see why old time blokeswear adapted to women couldn’t be adapted back to blokes (or of course left as is for any ladies on the team — I’m not sure if there are any, I think it’s quite a macho culture, but there could always be exceptions). Also, these make me want to rush out and buy a sewing machine… 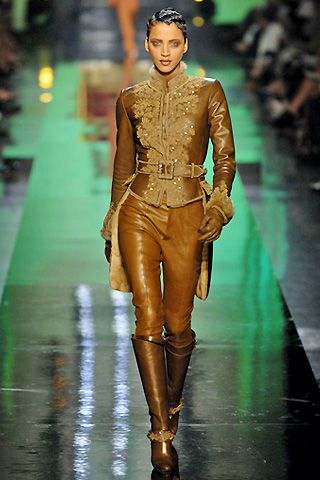 I can imagine the ladies in Ashamoil wearing this Gucci: While I’m on the subject of TEC world, Gwynn has had a few surnames in my mind over the years. I tried putting them in an anagram server. The one that wins hands down is Sinclair, which delivers Crawly Sinning, Canny Swirling, Scar Winningly, Snarly Wincing and Canny Girls Win. It also yields the words ‘wings’, ‘claws’ and ‘scaly grin’, suitably for a basilisk. So whether it’s his real name or not, it will definitely have been a nom de guerre at some point.

A dear little lizard dropped by the garden this morning: 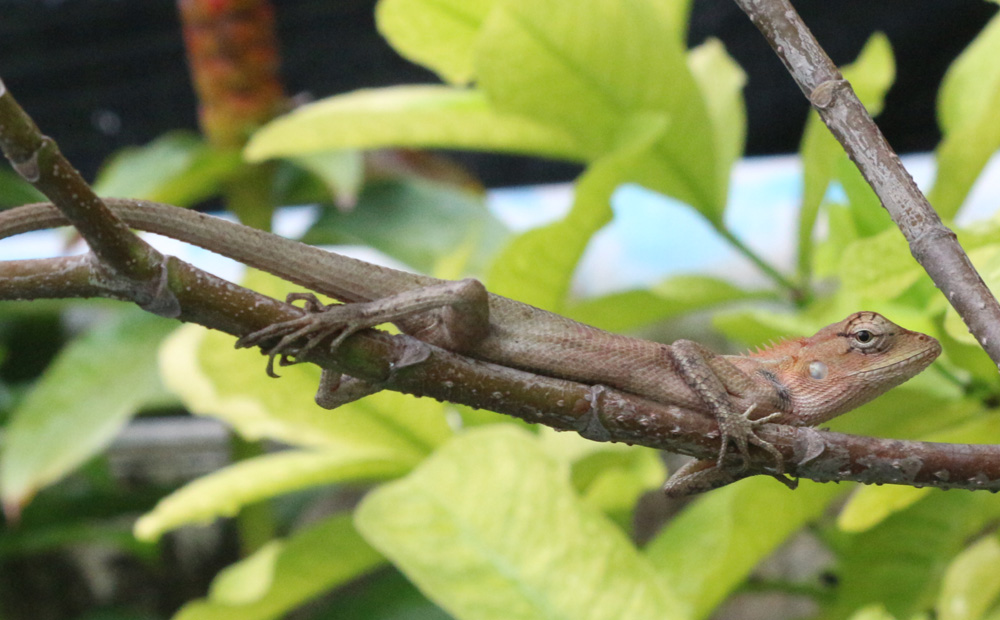 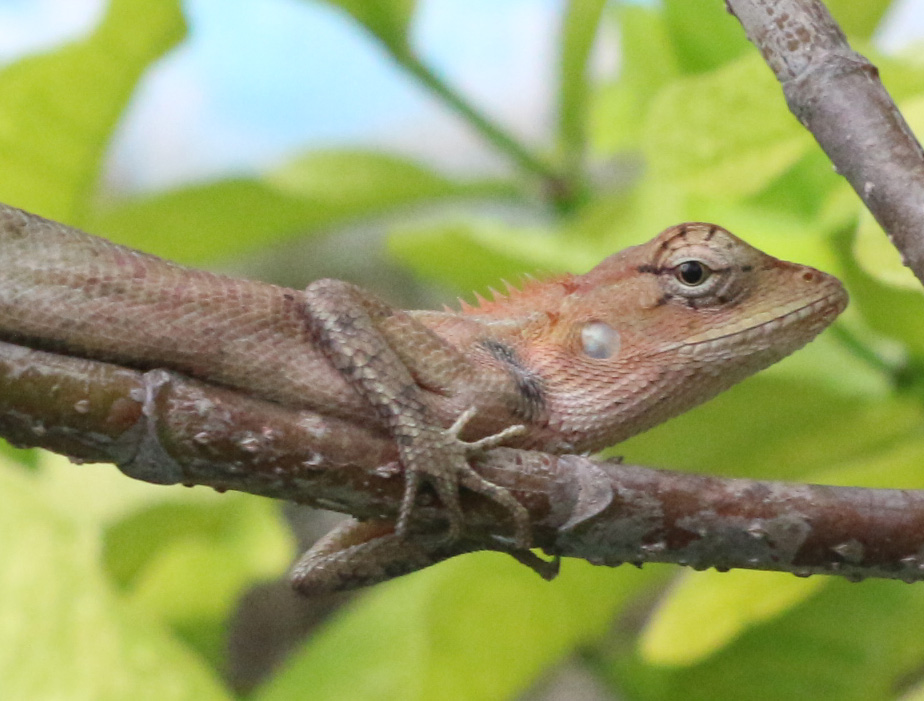